Ede welcomes everyone to our 10th Anniversary Celebration Meeting.  61 people are attending the meeting.  Ede introduces the 4 members of the Sarasota Modern Quilt Guild and welcome 5 guests. 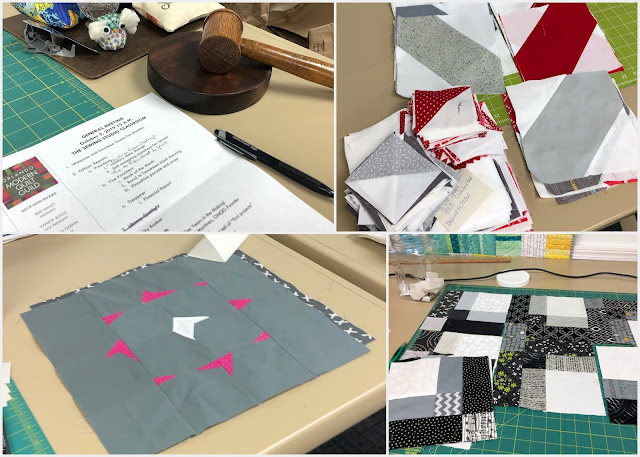 Please mark your calendar, our first meeting of the year will be on January 8th 2020 as the Sewing Studio has the New Year sale the previous week.

Ede thanks Pamela, Beth and Rene for representing the OrlandoMQG at the Fiber Festival.  It was a great event, creating exposure for the Guild.  One of the favourite exhibit was the Under water crochet project.

Block of the Month
Susan is the lucky winner of August and September BOM, although there were 2 different random draws.  We can't wait to see the quilt(s) she will sew.

Debbe presents October BOM: as we all gearing for the end of the year celebrations, Debbe chose an easy block, the Shoo Fly block.  You can use any colour as long the background is white.  The instructions will be on the blog very soon. 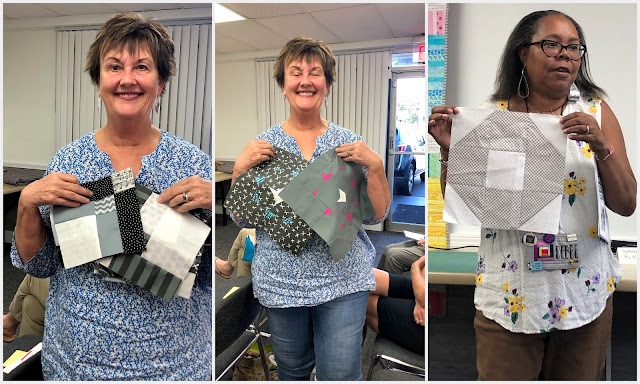 Kelly reminds that whoever brought the most Road to Tennessee blocks is getting a gift card from the Sewing Studio.  Catherine Carr send a massive 65 blocks and won the gift card.  Thank you Catherine for your wonderful contribution.  Alissa has volunteered to mail to card to Catherine.  Keep the blocks coming, we will have another draw next month.

Thank you Debbie for being the master organiser behind this swap with the Sarasota Modern Quilt Guild.

Julie (President), Cary, Joy (Treasure) and Jenni brought their guild's pincushions for the exchange as well as a bottle of 'adult beverage' which will be enjoyed at our next Sewing Retreat.

Julie explains that their Guild is now year 2 old.  Jenni was the first president.  There are 2 guilds in Sarasota:  the first one is limited to 50 members, so Jenny started a second one and it has ground to over 70 people.  The Guild meets the 1st Thursdays of the month at 6pm, they just had their first ever retreat.  More details about the Sarasota Modern Quilt Guild can be found on their social platforms: Website, Facebook, Instagram.

The Sarasota Modern Quilt guild recently had a presentation on how to transform antic glasses into pincushions, so there might be some in the exchange.  Please share your pincushion on Instagram with the hashtag #s2mqg. 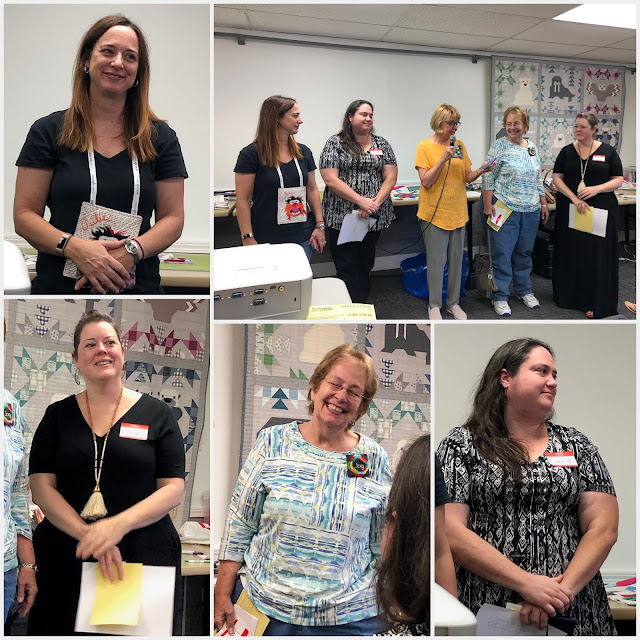 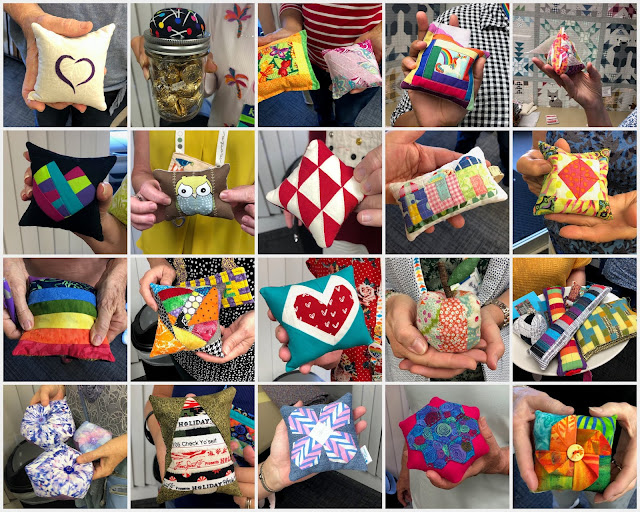 c. Treasurer - Financial Report
We had 4 new members joining the Guild in August.  So far our spending is in line with the budget. 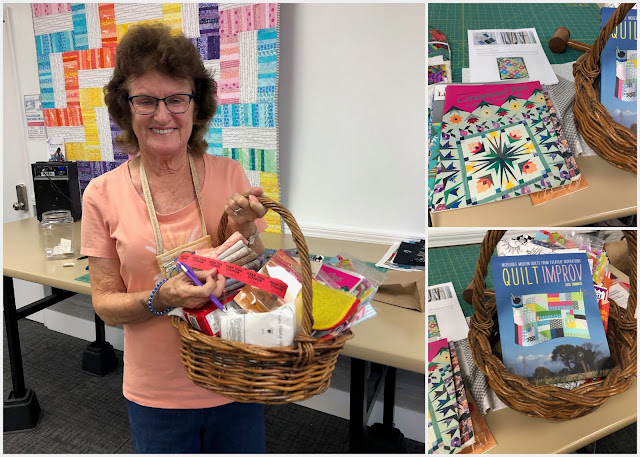 6. Programming:  Ten Years in the Making!

Rene, founder of the guild along with Michele, shares why and how the Guild came to exist:

"Once upon the time there was a  quilter who didn't have anyone to play with.  None of her friends were interested in quilt making and although her family was indulgent they didn't really get this newfound OBSESSION she had with taking fabric, cutting it into pieces and putting it back together again.

But then she discovered the online community of quilters which opened up a whole new world.  She started her own quilt blog and 'met' other quilters, including one who lived locally (Michele Lancaster).  Also around that time this modern quilt movement was happening and there was a group in LA that seem to be having a lot of fun and encouraging other areas to start their own fun group.  So she contacted them and was told there was not a guild in Orlando but that she could start one and she was like 'no I don't think so" and they were like 'yes I think you can do it' and she's like 'no I don't think I can", and they were like 'yes you can and we will help you'.

So fast forward three months of planning, emailing, etc and on March 2nd or 3rd of 2010 the historic first meeting of the Orlando Modern Quilt Guild was held.  I didn't know what to expect.  Many had express interest online, but who know if anyone would show up - beside Hope, Michel and myself.  But there were 16 of us at that very first meeting which was held in the small classroom behind the register over there at the Sewing Studio - thanks for Julia Hunt for arranging that.  People were excited to form 'their own' guild - since I had never attended a guild meeting before I was in favour of making it the way the members wanted.  There were no 'rules' other than what we chose.

There've been a lot of changes since then - the Sewing Studio has grown, our guild has grown.  I could go on and on and on about the Orlando Modern Quilt Guild - it's one of my favourite topics but I know that we are short on time so if anyone has any questions I can answer those or I can keep talking, but bottom line is this group is awesome and amazing and talented and diverse and inspiring - but most especially it is a fun, welcoming, and nice group of people!

Oh and the quilter in the story who didn't have anyone to play with, now she has lots and lots of friends to play with!"

Beth talks about the first charity drive the Guild got involved in - quilts were made and brought to a Nursing home in the Dr Philipps area.

i. Slide Show
The Slide show can be found on YouTube: HERE. 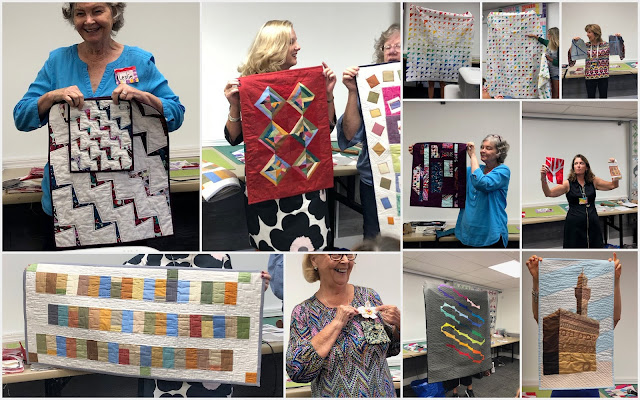 Ede encouraged everyone to join a class with the guild as it is always a great opportunity to meet people, even if you are not interested in the technical aspect. 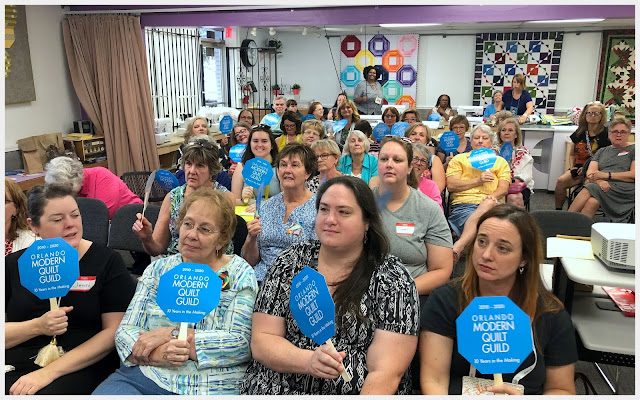 Yes, we all got a fancy fan, and some cupcakes.

Press on the picture to start the video, and on the rectangle at the bottom right for full screen.

As we warp the meeting, Ede thanks everybody in attendance and also explains that this guild wouldn't be what it is without members' participation and as the elections for the new board are approaching, she encourages everyone to think about getting involved.