President Alissa called the meeting to order; 52 members and 1 guest were present.

THE HOUSE NEXT DOOR QUILT SHOW 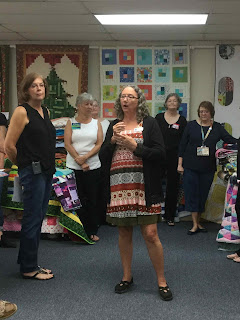 Alissa introduced Gail Hallmon, Operations Director of The House Next Door, and the quilt show organized by Charity Coordinator Sharleen with Emcee Frank, and models Alejandrina, Beth, Jane, Karol, Leslie, Marge and Sarah. Sharleen reported that beyond our goal of making 70 quilts for this annual charity project, she had received 89 or 90 quilts, including those coming in today, to go to The House Next Door.

Gail spoke about the SAT, Sex Abuse Treatment Program at The House Next Door in a program for child victims of abuse from babies to age 18. She said they have 10-15 new cases each month, 160 last year in two counties. She said that their staff work not just with the children but also with non-abusing caregivers including traumatized parents. Gail said each child chooses their quilt at the first counseling session and brings it back to each session for comfort, part of what they call their “stitched with love and care project.” 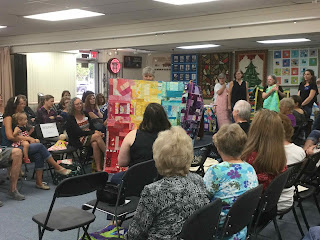 Models then carried each quilt down the center “runway” and around to show the front and back to the members before they were given to Gail to take to The House Next Door. 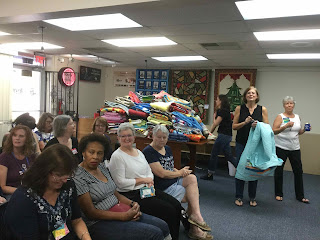 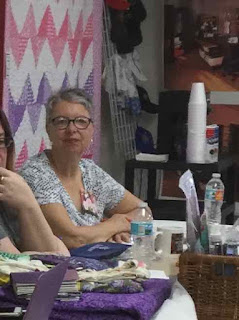 Joan asked all new members to come to her for their new member gift and guild pin, if they hadn’t already received them, noting how many new members have joined over the summer. She thanked Marge, former Treasurer, for filling in for her since July, not only on the usual duties but keeping track of the funds related to the Quilts for Pulse project. She had checks to refund all money deposited by members for the retreat, which had to be cancelled. She noted that October’s Raffle Basket brought in $64, an all-time high. With that and only one membership as income and refund of $3,591 in retreat deposits, it was a month in the negative leaving the guild with a balance of $12,074. 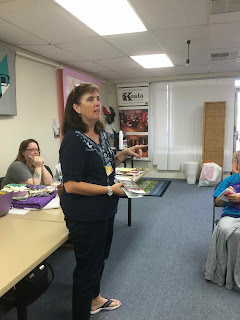 Education Coordinator Ede reported that our next class is a dyeing class from Frank on January 7, 2017 at Alissa’s house. The class costs $60 and is limited to 12 students, who will each take home 8 yards of fabric. Frank has offered to teach the class a second time if there is enough demand, so let Ede know by email if you would be interested in taking the dyeing class at a later date.
Ede reported that Mary-Jeanine, a Sewing Studio teacher who offered to teach two classes free to guild members who helped with the Pulse project, will teach those at the Dr. Phillips Library on February 4, 2017, with sign up at the December guild meeting. Ede said everyone can sign up for both classes noting their preference, because there will probably not be space in the classes for anyone to take more than one; she will try to give people their first choice. See descriptions and pictures of the class samples in the newsletter that went out by email yesterday (November 1).
MANCUSO WORLD QUILT FLORIDA

The guild has accepted the invitation of the Mancuso Show to have a display of quilts at the World Quilt Florida show in Orlando in January. Tanyia is in charge of gathering quilts from members, which should be modern quilts and must have a 4” hanging sleeve; there is no size requirement. Anyone wishing to show a quilt there should contact Tanyia by email – even if you have before - to be sure she has everyone. Email Debra if you are interested in details on how to enter your quilt in the show rather than in our guild’s display.

Alissa reported that the Maitland Library Sew Day next Monday will be one at which we hope a number of people will help sew labels into Pulse quilts. Mary Sm will bring about 55, and Alisa will bring about 108, because we only have 163 labels (400 more have been ordered). They will be late to Sew Day, because there is a guild board meeting at 9:30 at the First Watch on 17-92 in Maitland. 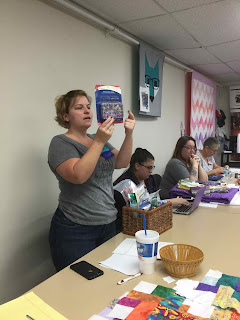 Rebecca, who won the Raffle Basket last month, returned it filled with items, including a fabric, jumbo Wonder Clips, a tin of special Fons & Porter directional pins, a mini charm pack and other things. The basket was won by Patty. 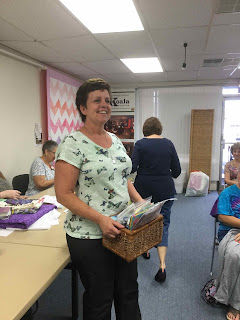 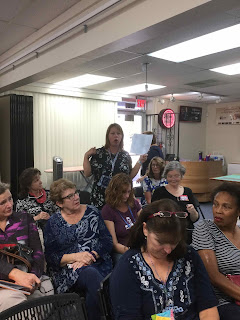 Kelly asked everyone to check the UFO log, to be sure it is correct as to which UFO projects members have finished. She reminded everyone that prizes are given at our December Holiday Party with one entry in the drawings per UFO finished. There will be a prize for the member who has completed the most UFOs and another for a random drawing winner, so you can win a prize with just one finished UFO. 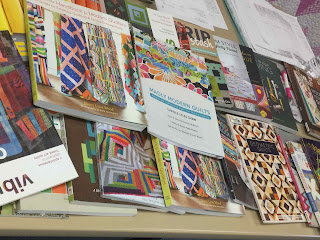 Guild Librarian Yanick usually brings requested books to meetings, which members have asked to check out; she was absent this month, so Tanyia brought them. The book list is available at the website. Books may be checked out for a month at meetings and must be returned at the following month’s meeting.  Tanyia mentioned that we have 3 new books, and Mary W. donated another one signed by Gwen Marston during Show N Tell.

Alissa asked members at the last meeting to help design guild t-shirts that members can purchase by submitting their ideas, but so far only Alexis has sent her ideas for things to be printed on t-shirts along with our logo, so she invites all members to email their ideas to her before next Monday. The board will discuss t-shirts at their next meeting, where Alissa will present costs and information on online ordering possibilities (11-7-16).

The guild’s Holiday Party will be at the December Dr. Phillips Library Sew Day, which is December 17th.  It will be a potluck. We will have a swap that day, so please bring a wrapped pincushion for the exchange. Beth suggested having an exchange at the Maitland Sew Day, too, for those who don’t attend the one at Dr. Phillips Library; Alissa said the board will discuss it next week.

Lunch for those who want to eat together will be at the Olive Garden on 17-92 in Winter Park.

Alissa asked that anyone who has blocks for the QuiltCon charity quilt let her know they have them and get them to her within the next week or so, so they can be put together. Nancy S. has volunteered to quilt it. It will be entered in a special exhibit of QuiltCon charity quilts at QuiltCon 2017 in Savannah, GA, in February and returned to the guild afterwards for donation to a local nonprofit. 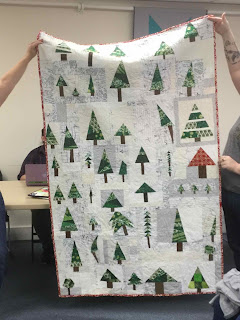 Tanyia reported that the quilt top made of members’ blocks for donation to the Orlando Museum of Art’s Council of 101’s Festival of Trees has been quilted by Nancy S. for this year’s Festival of Trees, November 12-20. It was shown during Show N Tell.

Alissa reported that the project is finally winding down, although she just received 2 more quilts. She said 1,100 quilts have been labeled and photographed with more ready to photograph. About 1,000 quilts have been requested by organizations with a number of those distributed already this month (130 to Orlando Fire Department, 230 to OUAC for the injured and loved ones of those who died, 100 to the Legal Aid of Orange County Bar Association, which supplied a lawyer for each of 100 people after the shooting to deal with a variety of issues).Some quilts have been requested for individuals and delivered or mailed to them, including one to a young woman in the mayor’s office who checked the spelling of each victim name in all of the many releases about the Pulse shootings (requested for her by her mother), among others.

Other distributions have been planned by Alejandrina, Sarah and Yanick, including 71 to 911 operators, 60 to Orlando Health and 104 to Florida Hospital for medical personnel, and 200 for an event at the Abbey or the Mez, both in the Sanctuary building at 100 S. Eola, downtown Orlando, at which Mayor Buddy Dyer will be presented with a special Pulse quilts. Nancy, whose daughter owns the Abbey announced that the Abbey or Mez event on 12-13-16 will include press coverage, a display of the Pulse quilts, and distribution to 50 Pulse employees. The official event will be 5-7 pm but there will probably be an earlier open house for Pulse employees who have to go to work. More details will be provided as we get them.

Alissa said to pass along suggestions for additional recipients, such as Mary W’s suggestion of staff at the Hampton Inns & Suites where many of the families met in the aftermath, to Alejandrina and her committee (Sarah and Yanick) to be considered with others not on our current distribution list.

Alissa said about 60 quilts have been sent to non-member volunteers to be quilted and there are more quilts out to guild members to be completed, including 10 she will longarm. Some quilts were available for members to take for quilting and binding after the meeting.

Paula will be at Sew Monday to take all labeled, ready-to-go quilts to her studio to be photographed. Jeff asked, and Alissa said the QR code on the label is supposed to link to the guild’s website. Leslie was taking a count during the meeting to try to locate all quilts that are still out with members for finishing, since we have had trouble keeping a strict count. It was noted that we now have 1700 note cards for thank you notes.

Alissa reported that she will do a blog post when everything is done, probably in January, to try to quantify everything – amount of fabric, amount spent on shipping quilts to us, time spent by so many volunteers, the number of hands quilts passed through before distribution, number of packages received (1500), number of hours spent on this project. 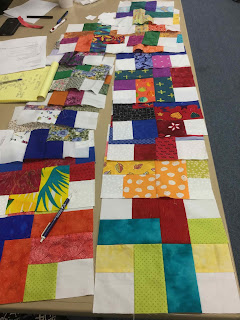 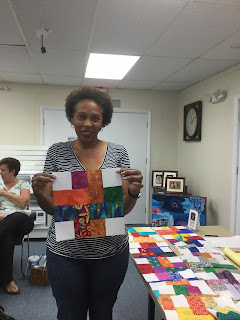 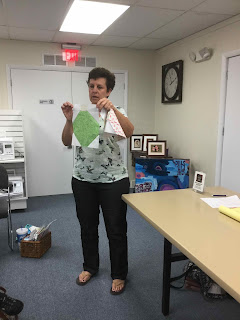 At last month’s meeting, Kate invited members to make blocks (or quilt tops or quilts) for her project of making at least 4 quilts for the family (parents and 3 siblings) of Jacob Wetterling, whose remains were recently found after a confession was made to his murder; he had disappeared as a child in Minnesota in 1989. Instructions for the blocks or quilts requested at her site at https://www.instragram.com/toughkittencrafts. She has received 29 blocks so far and would like any others at the December meeting.

Alissa reported that she has received some suggestions of Orlando icons to be included in the design of a guild banner. That will be discussed at the board meeting next Monday. 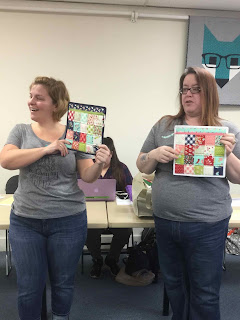 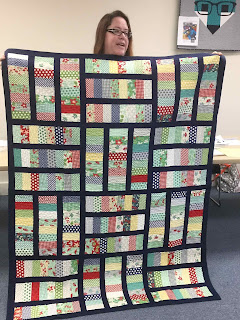 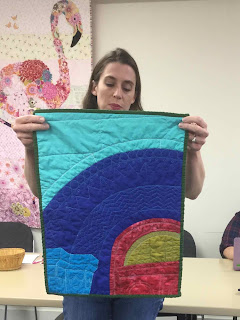 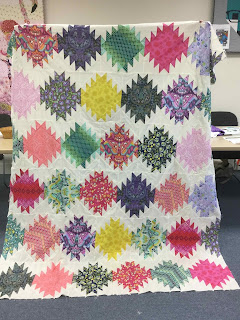 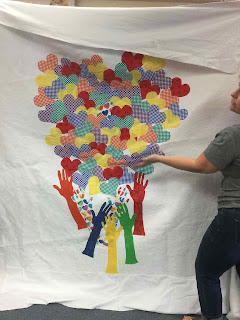 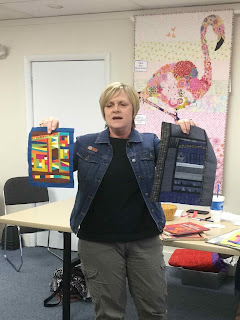 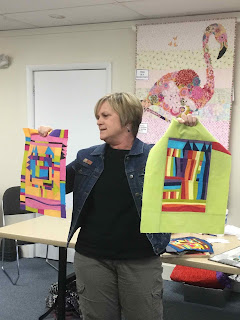 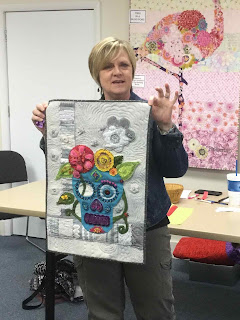 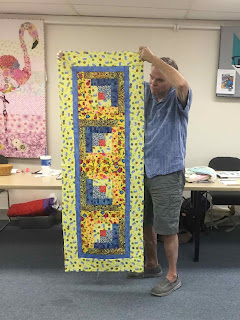 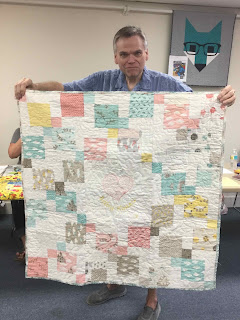 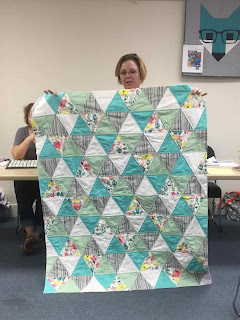 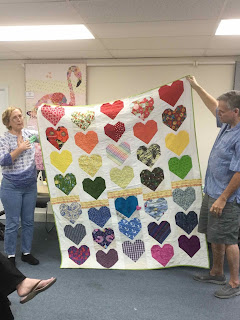