President Alissa called the meeting to order; 47 members and 4 guests were present; the guests each introduced themselves. 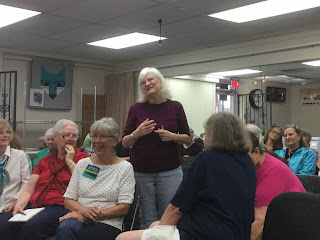 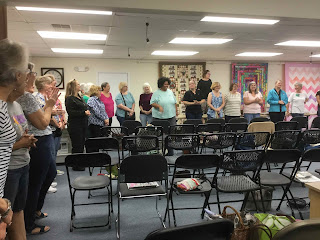 The Icebreaker this month everyone lining up in alphabetical order by last name. 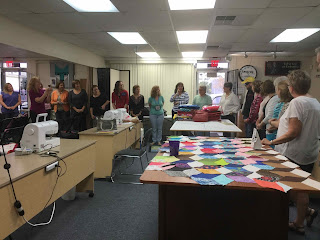 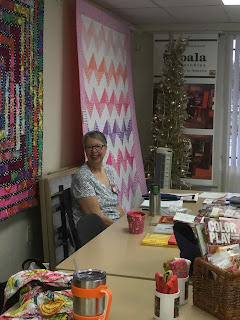 With various expenses for the Quilts for Pulse project, purchase of books and appreciation gifts, and income from the Raffle Basket, membership and class fees, there was a net loss for December, leaving a balance of $11,547.60.

Mancuso’s World Quilt Florida will be at the convention center January 19-21, and the guild will have a display there. Alissa has received information about a Shibori dyeing class in South Florida in February; email her if you are interested in the details. 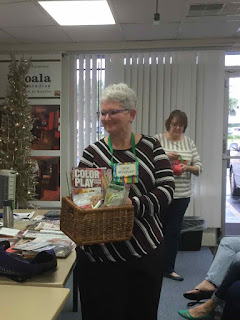 Jane returned the Raffle Basket filled with a book about color theory, a coloring book and colored pencils, fabric, a set of different weights of thread and other special items. The basket was won by Paula.

Kelly, who keeps the UFO log was not present, but Alissa explained for new members that everyone can list projects in the log which they hope to finish this year. For each project reported finished by December’s meeting, the maker’s name will be entered once in a drawing at the Holiday Party. The one who finishes the largest number will win a prize, but there is also a random drawing so one can win with just one project on the log completed.

Alissa asked for a count of members planning to attend QuiltCon in Savannah, February 23-26, and there were 24 present planning to go or considering it. Heather, at the Modern Quilt Guild national office has allowed us to have a display at the admissions area, which will include many small prints in two sizes of Quilts for Pulse quilts, and Alissa asked for volunteers to help pin them to the cardboard wall on Wednesday, the day before QuiltCon opens; Patti, Mary W, Marge and Ede volunteered to assist her. She will email those volunteers when Heather sets the time. The display will also include statistics Alissa has been gathering and calculating – number of quilts, number of packages, postage, hours spent making quilts, amount of thread and fabric, etc.

Heather also set an official Meet & Greet for Quilts for Pulse on Saturday, February 25, at 12 n or 12:30 pm, in front of the display, and Alissa asked for volunteers to be there as ambassadors to thank people who contributed and to answer questions. Alissa asked that anyone who can help at that time to let her know by email.

Alissa asked the group to agree to a good time to meet for dinner, and all agreed on Thursday, February 23.

Alissa announced that Debra J has had 4 quilts accepted into the QuiltCon Show and Anne s has had 2 quilts accepted. The guild congratulates both of them on this achievement. 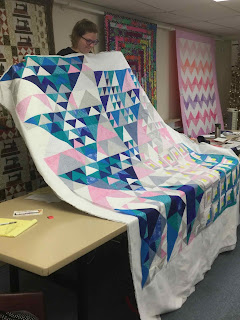 Alissa showed the OMQG Charity Quilt which will be submitted for display at QuiltCon and then returned for us to give to a local charity. 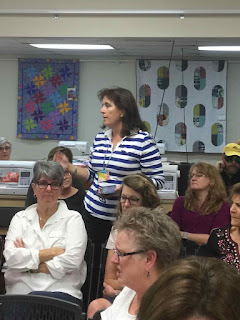 Education Coordinator Ede reported that Frank’s dyeing class on January 7 is full, but there are still openings in both the morning and afternoon free classes offered by Mary-Jeanine on February 4th to all who were involved in the Quilts for Pulse project, and the sign up sheet was available.
There will be an opportunity to sign up for Jacquie Gering’s March classes at next month’s guild meeting, and what the classes are going to be will be announced later.
ELECTIONS

Ede, as a member of the Elections Committee (Ede N, Karol E and Jodi P), introduced the slate of nominees to be voted on at the February guild meeting, with each nominee introducing themselves: 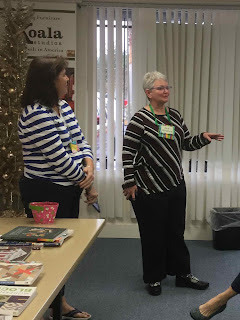 ·      Member at Large – Jane A – Jane said she sees the position as a sounding board for members to bring ideas and concerns to the board.
·      Education Coordinator – Anne S – was not present but is a new faculty member at UCF and teacher at QuiltCon. Ede hopes she will offer a class or program for the guild on color theory, and she has many connections among modern quilting teachers. 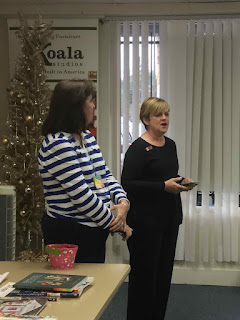 ·      Charity Coordinator – Mary W – indicated that she has been very involved with nonprofits and charities where she lived before and is excited to continue to connect with charities here. Mary would like there to be more committees to involve more members, and she plans to put out a calendar of charitable projects spread over the year as a place for members to connect. 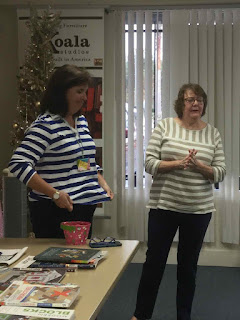 ·      Treasurer – Marge C, who has been treasurer before, loves numbers and says communication is a big deal to her; she hopes to get to know everyone in the guild by name, and she is big on surveys for finding out what members would like.
·      Secretary – Mary Sm will continue as secretary after holding that position the past year. She encourages members to consider the job next year, because it’s not too time-consuming and interesting being on the board. 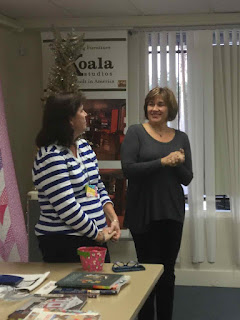 ·      Vice President – Paula K has been a member less than a year but found the Pulse project this past year was a great way to connect with the guild. Her personal goal for the coming year is to show something at Show N Tell for the first time. Her pet project will be to work with new members so they feel connected. 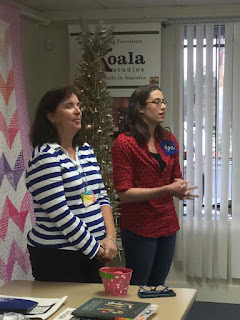 ·      President – Sarah L also found the Pulse project a great way to get involved and is excited about the coming year. She sees her job as listening and moving along ideas.

Ede told the guild that getting involved in guild activities as a volunteer is a great way to feel a part of things, and encouraged people to consider joining committees or running for office next year. She encouraged members interested in being on any committee to talk to either Paula or Sarah about it.

Members will vote on this slate of nominees at the February guild meeting, and the new board will take over at the March meeting. Mary W thanked Ede, Karol and Jodi, the Elections Committee, for their work on putting together the slate of officers for next month’s election. 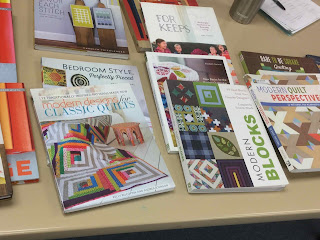 Guild Librarian Yanick brings the guild’s library of modern quilting books to meetings but would like to bring just books which members have asked online to check out. The book list is available at the guild website. Books may be checked out for a month and must be returned at the following month’s meeting.

Paula reported that she has photographed 1,768 quilts, and a quick informal count at the meeting of those yet to be photographed indicates that there will be over 1800.

Alejandrina asked for volunteers to attend a rehearsal of the Orlando Gay Chorus some upcoming Wednesday, 7-10 pm, where the guild will give them a small quilt to go on their awards wall. Judy T took the quilt, and others wanting to attend that distribution are Alissa, Debra A and Paula. 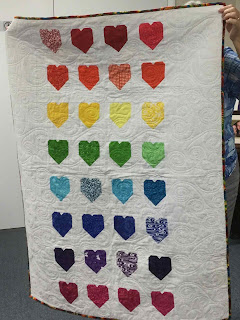 Lunch for those who want to eat together will meet at the Ale House on 17-92 in Winter Park at 12 noon. 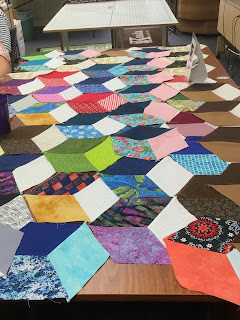 Diana’s Block of the Month brought in 55 blocks, which were won by Judy T. 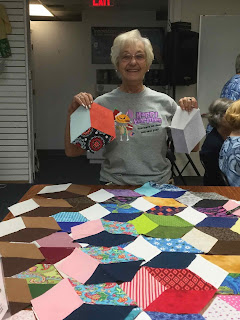 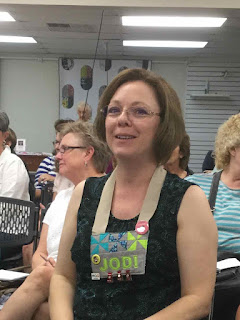 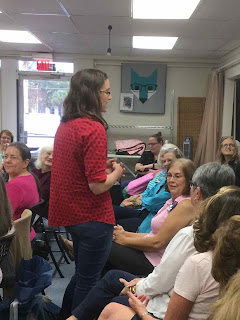 Sarah thanked everyone who attended the Quilts for Pulse event on December 13 at The Mezz in downtown Orlando where quilts were distributed to Pulse employees, City employees, and special quilts were presented to Mayor Buddy Dyer, Barbara Puma, owner of Pulse, and Patty Sheehan, county commissioner. 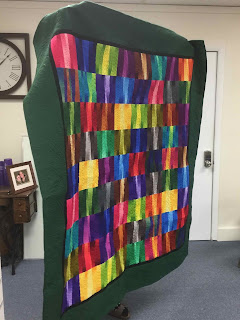 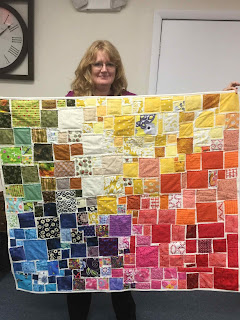 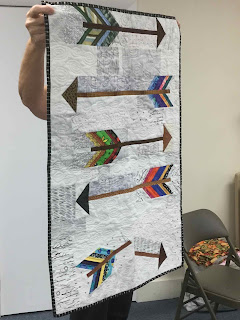 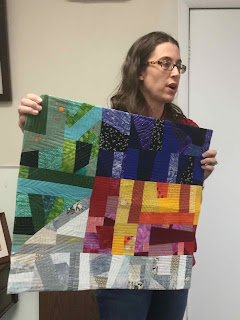 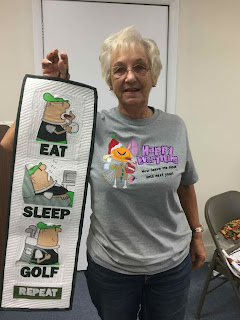 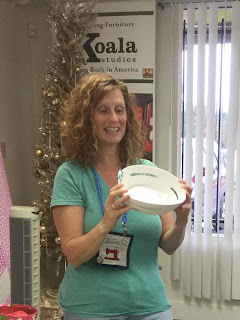 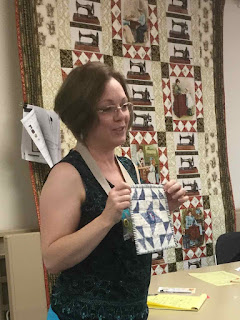 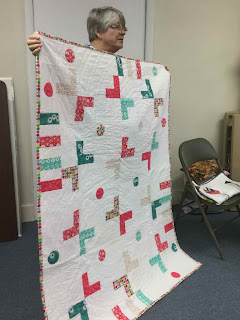 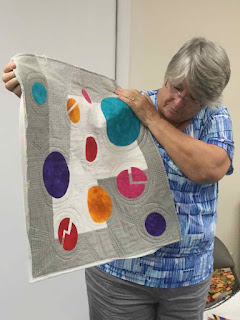 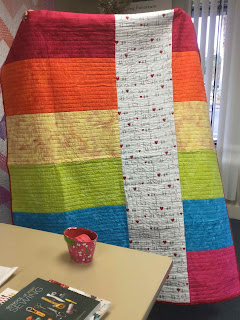 After Show and Tell, Alissa used a random number generator to choose winners of two door prizes, which went to Marilyn and Zonetta. 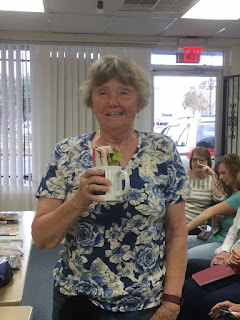 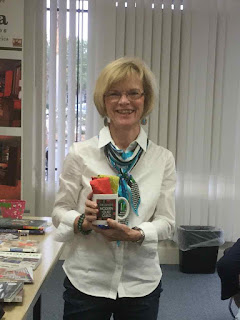