President Alissa called the meeting to order; 50 members and 1 guest were present. The six new members introduced themselves.
ICEBREAKER
Alissa passed out paper and asked members to make suggestions for what the guild will do with the charity quilt we made for QuiltCon 2016.
TREASURER’S REPORT

Joan received membership forms and dues for renewals and new memberships, including 6 new members. Each person joining or renewing chose a gift of a Modern Quilt Guild mug or project bag. Joan asks anyone who plans to join or renew to please pay their dues right away, so the new roster she will be email to members soon will be up to date. Members also signed up and paid for the Mandy Leins class on May 7th, "Improv on a Photo." There are still places available in the class.

Leandra returned the Raffle Basket filled with many new and special items. The basket, which brought in $48 for raffle tickets, was won by Debra. 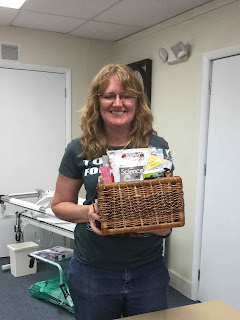 EDUCATION
Education Coordinator Ede reported that Christa Watson will be teaching a class on September 24th and that Stephanie Kendron of Modern Sewciety, who conducted the recent podcast with OMQG officers, may be coming to the class. Diana reported that she will be reviewing Watson’s new book and will post her view on the guild blog and at Amazon.com.

Ede also reported that Jacquie Gering is coming March 17-19, 2017, to give a trunk show and teach for two days. 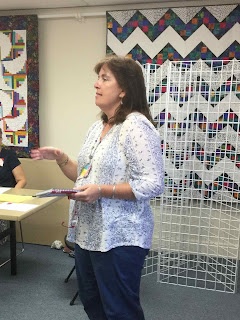 Education Coordinator Sharleen reported last month that the group supporting the deploying Florida National Guard troops, for whom the guild made hundreds of pillowcases, had requested items to fill the cases for the soldiers, and contribute items were collected.

Sharleen explained the current annual guild charity project, providing 70 quilts to the House Next Door, a nonprofit which serves child victims of sexual abuse, by the end of the year. She has received 17 so far. The quilts to be donated should be 48” x 60”, though smaller will be accepted.

She will announce a 30-day charity challenge at the May meeting, which will be due at the June meeting. 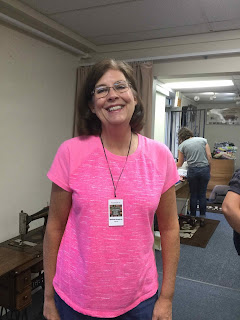 Cara reported that Kate has started a Kickstarter campaign to purchase sample quilts from Wandering Stitches, with her employee discount, for the House Next Door; she has 15 so far. 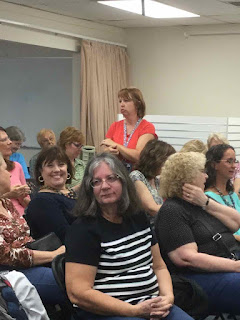 Tanyia reported on the mini quilt swap with the Las Vegas Modern Quilt Guild, reminding those participating that their minis are due to her June 1st, so should be brought to the May meeting or mailed to her. They should be wrapped with a card on the outside, showing the recipient’s name, and a note introducing yourself. If you want to show your mini at Show and Tell in May, Tanyia will wrap it for you. She said, if the person has not posted anything in Instagram to share their tastes, to go by their list of likes and dislikes. No extras are allowed in this swap. Minis are to be 12”-to-24” each side, any shape. Tanyia will mail them to Las Vegas as a group. 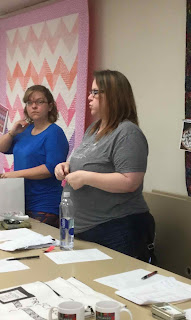 LUNCH
Tanyia announced that lunch this month will be at 12:30 following the meeting at Applebee’s on US 17-92.

Yanick brings the guild library of quilting books to each meeting. See her to see what is available and to check out books, which must be returned at the following month’s guild meeting.

April’s Blocks of the Month were won by Cara. 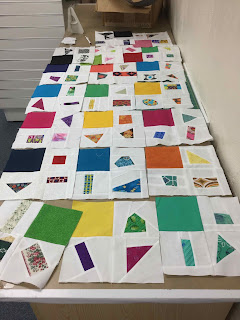 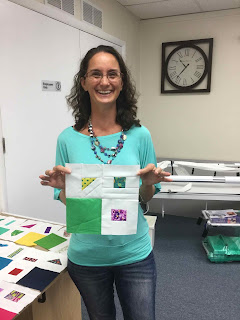 Kate presented the Block of the Month for May. Directions are available on the guild blog. The blocks should be 12” and monochromatic, any color. She said, “do not be afraid” to improvise. 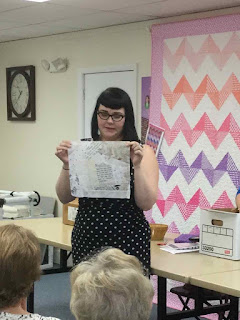 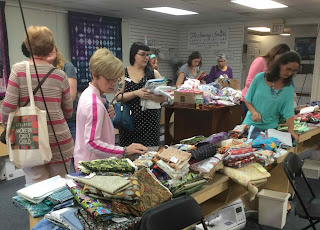 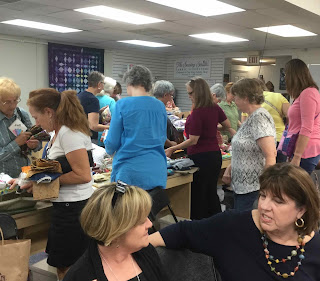 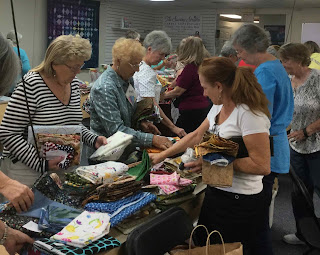 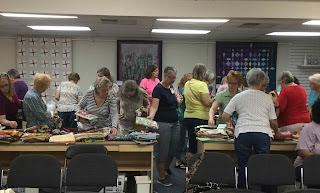 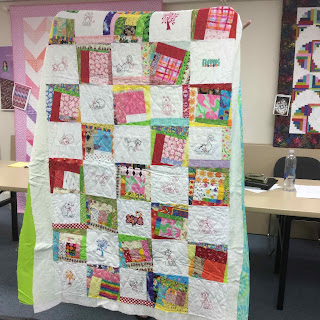 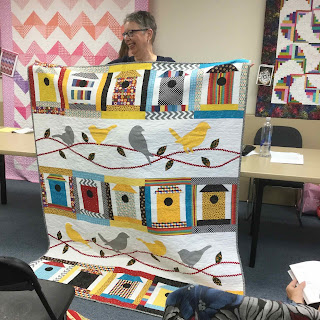 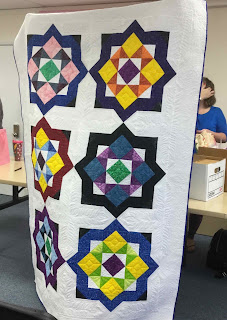 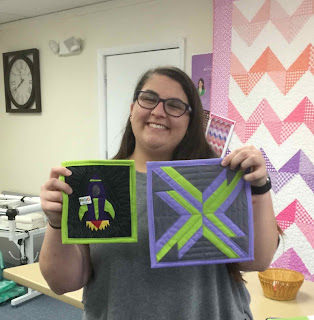 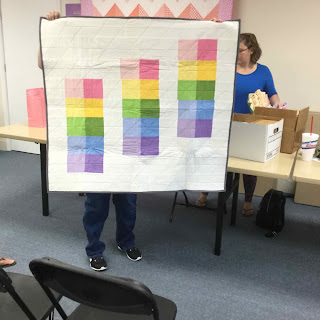 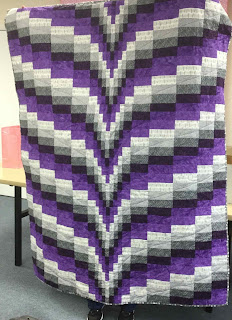 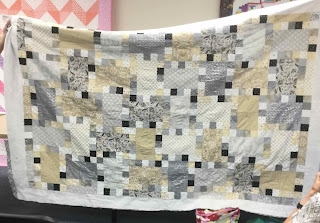 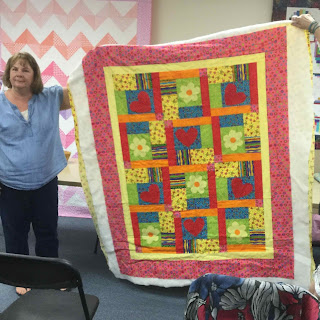 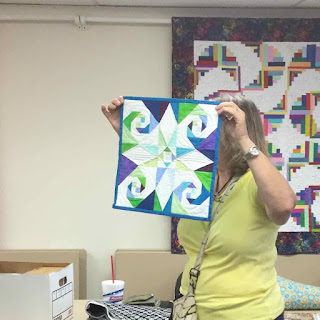 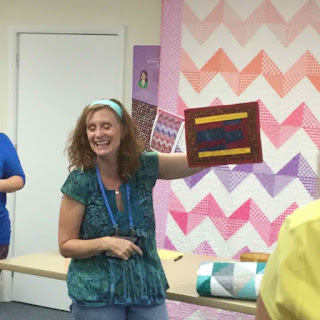 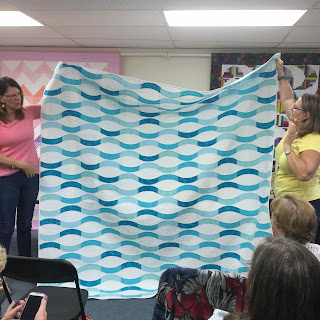 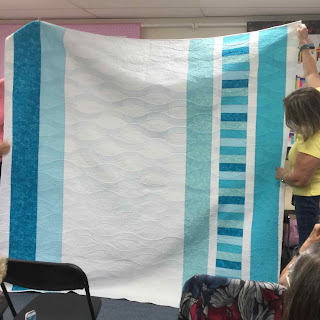 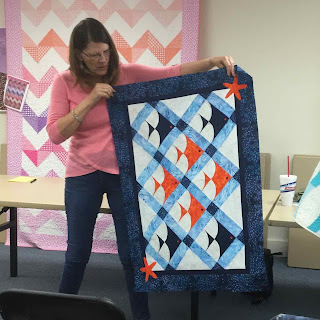 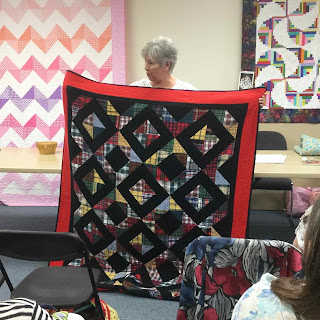 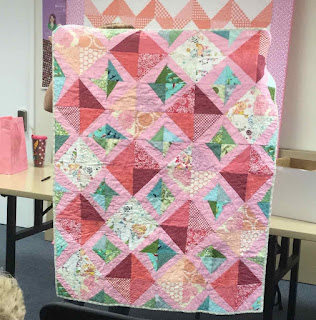 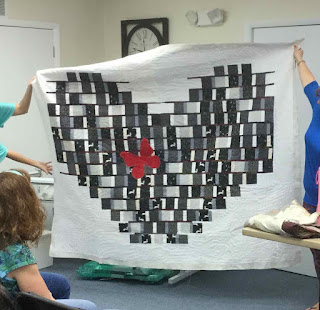 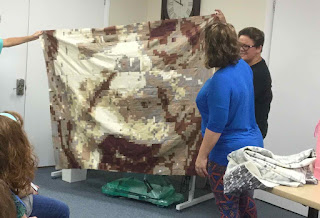 Remember to return membership forms and dues for this year to Joan, if you haven’t already, so we have current information for everyone and all names for the new roster. If you are taking part, remember to have your Las Vegas Mini Quilt Swap mini to Tanyia by June 1st.