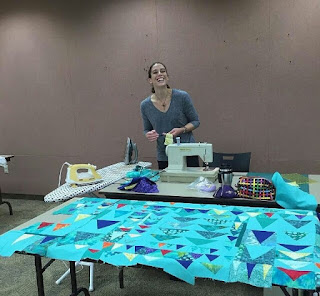 I’ve been quilting for about ten years, off and on.   I began a few years before the modern movement was formalized, but could see the beginning (especially in retrospect) from participating in Flickr groups back then.   Work, grad school, starting a family, and multiple moves all seemed to put this hobby on the back burner.  However, I did a count and I’ve averaged 1.5 quilts per year over ten years, so I guess I wasn’t entirely dormant on my sewing even though I was pretty much radio silent about it. 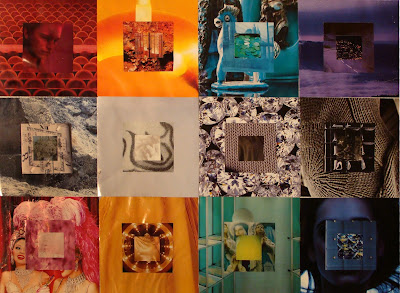 The idea of quilting started for me as it did for my mother – in the firm affirmation that we would never do it.  As in, “that quilt Grandma made is amazing but I can never imagine having the time/skill/patience to do something like that”.  Then my mom started, and quite a while after that I was making some art collages with cut out magazine squares and my mom says to me, “You know what you’re doing, right?”   It should have been obvious.  So I sat with her at her house and she showed me, step by step, beginning to end, how to make a quilt.  Now I’m a fourth generation quilter.

I’m very thankful for that lesson.  It gave me a creative outlet that stuck.  I’ve always felt like a creative soul trapped in a business person’s body so having an outlet is just like a kind of freedom.
A lot inspires me – as a kid my best friend was an amazing illustrator and because of her I have always admired artists’ abilities.  My mother, grandmother, and aunt were always up to something crafty so that was supported.  I married an architect who taught me how to see things in a whole new way.  Fashion, interior design, fine art…even flower arranging all feed into the images that decompress and rearrange in my mind.
Attending the Victoria Findlay Wolfe class the Guild hosted in December 2014 sparked a creative resurgence for me.  Other quilters who inspire me are Sherri Lynn Wood, Meg Callahan, Sarah Nishiura, Eleanor McCain, and Hillary Goodwin.  And just hanging out with the Guild the last six months has really upped my game.  There is so much talent in this group and I’m excited to get to rub shoulders with all of it. 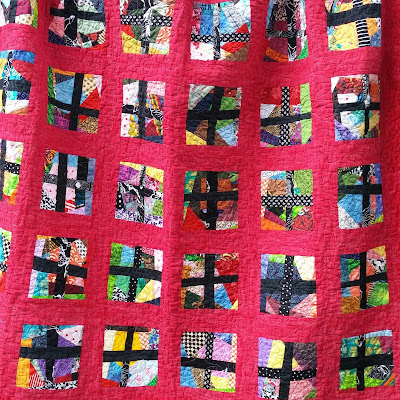 Current project is deciding on the quilting for “Teal Number 2”.  I was working on a wedding quilt for some friends and the design took two different directions.  The second direction began with the same teal and grey color palette and took inspiration from art by Sven Markelius and the flying geese score from Sherri Lynn Wood.  I started with eightteal toned large flying geese blocks, then iterated some more, decided to add in a little bit of jewel tones, then felt really right when I figured I wanted to dip the whole design into greyscale at the top and the bottom.  So that quilting… I think I have it now but it sure is the part that is hardest for me both in concept and execution. 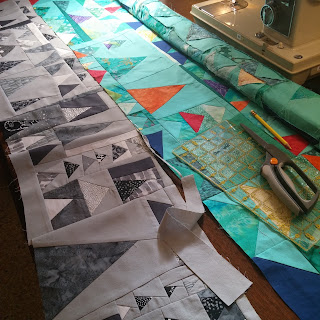 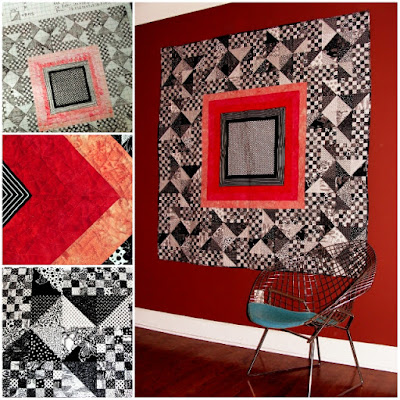 My favorite creation was my first original design called “For Elisa”.  It was one of those happy creative moments that just poured out so fluidly it seemed like it really wanted to be made.  The medallion center is based on a scarf of mine that my good friend liked.  The outer blocks are a based on a pattern that I noticed in bench upholstery at a diner.  She says she still uses it all the time and that makes me so happy.  I may remake it one day.

Creative process?  It has many manifestations.  Usually it is based on the recipient, so thinking about that person drives design choices around a fabric I want to work with, or a design concept.  Sometimes I get an image in my head and I run to the sketchbook.  Lately, I’m feeling creatively inspired by design challenges and improv concepts.
My bachelor’s degree is in Philosophy so I get really excited thinking and talk about the art vs. craft distinction, whether a quilter thinks they are an artist, and I’m fascinated with the discussion surrounding the schools of design in quilting. Don’t be surprised if I ever use those topics as an icebreaker…fair warning. I think I may be a Modern Eclectic.
getting to know you member highlight members 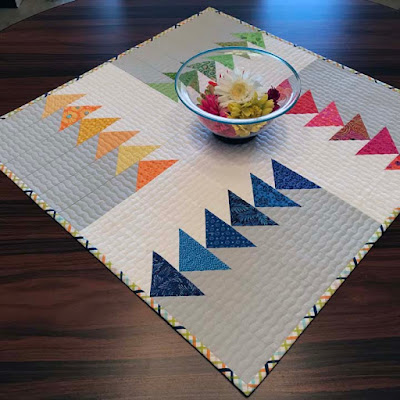 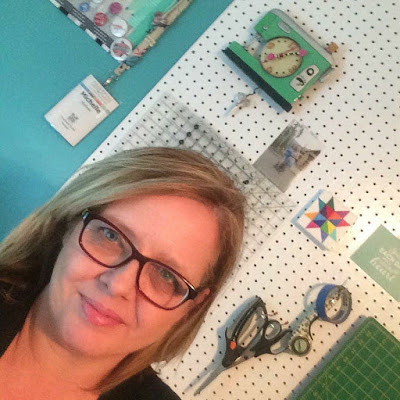 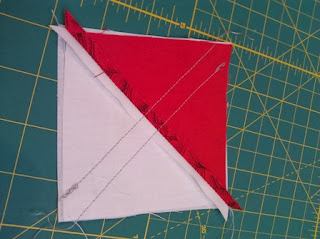 Another two-for-one little project for HST lovers! Here is the tutorial:

Wild Waves Tutorial
You end up with two 12 1/2 blocks, using white and bright colors from the scrap basket, YEAH. The tutorial is quite detailed, so there is not a lot to add except to share a couple of my experiences building the sample block.

First, after building the half white-half color squares, you are supposed to sew them to the 4 1/4 white squares (tutorial figure 4) When I put them right sides together, they did not match at all! The white 4 1/4 squares are larger than the HSTs:


Don't be alarmed, all is well...you get to trim the excess later. I matched the color corner and sewed on.

Second, when it is time to trim down to 3 1/2 inches (tutorial figure 6), I trimmed all 4 sides so that the point of the color triangle is always exactly at the center of a 3 1/2 inch square on the ruler. Like this:


You get perfect squares: