July Block of the Month

Posted by Rene' on June 02, 2011
July's Block of the Month is a Disappearing 4-Patch block made in red, white and blue fabrics.  When completed, it will measure 8.5 inches square.  This block is really simple to make, but when finished looks like a complicated block.  There are various tutorials and methods for making this block (here for instance); I will show you how I made mine. 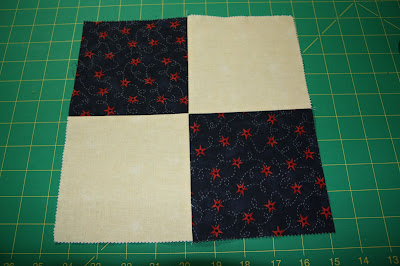 Start with two sets of five inch square blocks and make a four patch block.  Make sure you have good contrast in your fabric selection.  The color scheme is red, white and blue, but you do not necessarily have to use patriotic themed fabric.  After this step, if you use a scant 1/4" seam, your block should now measure 9.5 inches square.

The next step involves making four cuts without moving the block or the cut pieces.  It helps if you use a small mat that you can turn, a table that you can walk around or a revolving cutting mat.   Use the center seams as a guide, measure out 1 inch, and make your first cut.  Measure 1 inch on the other side of the seam, and make the second cut.  Rotate the block and repeat, measuring and cutting 1 inch from the center seam on each side.
The above picture shows what the block will look like after the four cuts.  Next, leaving the center block and four corner blocks as is, rotate the four center outside sections 180 degrees using the below photograph as a reference.
Your block should now look like the above picture.  You now have a nine patch block.  Sew the sections together using a scant 1/4" seam.  Square your block to 8.5". 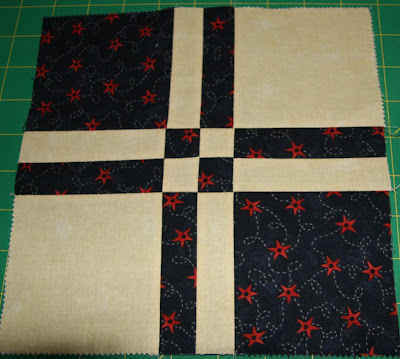 Stand back and admire your beautifully simple, yet complicated Disappearing Four Patch Block!  Repeat as many times as you'd like;-)  Since there will not be a guild meeting in July, bring your July blocks of the month to the August meeting.  Look for a different block of the month to be posted soon for August.
As a side note, this block can also be made starting with a nine patch block, but I really like the way this block comes out using the four patch block.  Different looks can also be obtained by varying the width of the cuts made from the center seam.
BOM