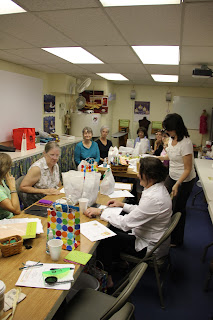 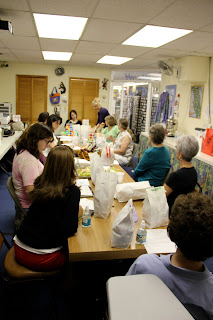 The Meeting was held at the Sewing Studio in Maitland and there were 13 members present.


Approval of Minutes
The October 2010 Minutes were approved without discussion.


Treasurer's Report
Michele reported that OMQG currently has a $601.25 balance in funds and 27 paid members.


Thanks
Gifts were presented to Demo Hosts (Beth, Michele and Kathryn) from past meetings.  (Julie was not present.)

Bags of scrap fabrics and fat quarters were given to attendees.

II.  Demo
Rene presented string block techniques. The blocks in her charity quilt project were an example of string blocks. 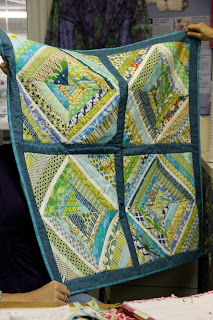 
Field Trips- We discussed the possibility of a future road trip to Heartfelt Quilting in Winter Haven as well as attendance at the Florida Cabin Fever Quilters show (Jan. 21 and 22, 2011) as another field trip idea.  http://www.floridacabinfever.com/guildshow.html

Challenge/Charity Project-the bags of scraps included many patriotic fabrics.  Hope proposed and the group agreed to a challenge in which each person would make one patriotic themed string block to donate at the Feb. Meeting.  We will use the paper piecing method of string quilting for consistency in results for obtaining 8.5 inches by 8.5 inches (resulting in 8 inch blocks in the finished quilt.) The blocks will be reassembled into a quilt for donation to a military family. 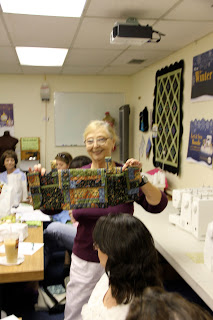 The holiday charity items are to be given to the Windermere Health Center who has identified 25 residents who do not have visitors or relatives living nearby.  The residents include 5 males and 20 females.  Beth has stockings and handmade ornaments that will be given to the residents in addition to the creative gifts made by other guild members. These gifts are to be presented to the residents on Tuesday, Dec. 14th at 10:30 am.  A number of people showed their donation creations at the Guild Meeting. If you have not passed on your donation projects to Beth, you can get them to her at the November sew day.

December Meeting
We also agreed that we would move back the December meeting to be held on the same day as the presentation.  We will meet at 9 am Dec. 14th prior to the presentation for a social get together at a location as of yet to be determined.

Survey
We plan on sending to all OMQG members a recap of the achievements of the first months of our guild along with a survey to gather your input on what you would like to achieve in the year ahead through the guild. For example what types of challenges, programs, projects, and learning experiences would you like to participate in. We also ask everyone to think about what type of role you would like to play as elections for officers are scheduled for the February Meeting. 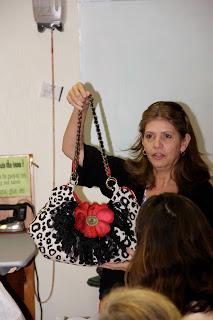 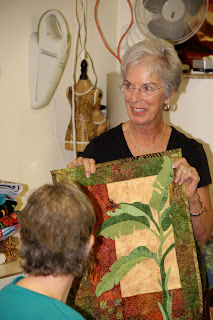 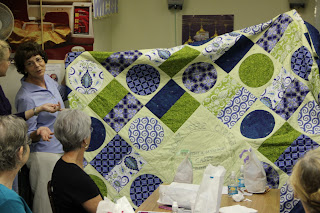 V.  Door Prize
The door prize was won by Sylvia.

While a few photos are included in this report other photos from the meeting can be seen in the group flickr account.